The synth-heaven that is the music studio at WORM

After finally meeting Henk Bakker and Lukas Simonis from Radio WORM/Klangendum (at last month Radio Revolten festival), I found myself performing as part of their interestingly titled concert series “Ether Sniffing” at WORM in Rotterdam, NL. The series focuses on artists and musicians who use radio (in the broadest sense – physically or aesthetically) in their work. My performance was the premiere of a new performance setup using multiple FM transmitters in a feedback matrix. Matrices are something I’ve been using for years (after reading articles regarding David Tudors use of them) but this is the first solo concert I’ve played for many years.

The two other acts in the concert presented a theremin performance (using radio waves) and my favourite of the evening, a hoerspiel titled“Time of Transition”, by the group, Monotak (radio aesthetics). Due to the travel arrangements of the other acts, I ended up headlining, a good trial by fire for any new performance! A recording of the performance will shortly be available on the “Live Performances” section of the site. 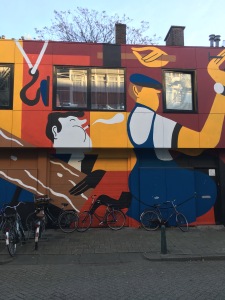 The very next day was a rush back to the U.K (via train, plane, coach, and another train) to join Robin the Fog for a Howlround performance in Brighton, at the Rosehill tavern. This concert found us as an unusal (from our perspective) support act to a self described “Canadian Jazz-infused Hip Hop” act – certainly at odds with Howlround’s radiophonic murk. The concert was somewhat jeopardised by the fact that one of our four tape machines completed failed, leaving two looping machines and a tape delay. A rather minimal palette to work from but performance was very successful (the headlining act, Official Burnt Toast, stopped their performance to single us out for inspiring them so much!)