Bradley and Weaver is the artists duo that I formed with Fari Bradley in 2006.  We have released vinyl records, composed and performed music works, and participated in thematic group shows internationally. Since 2013, they have been a presence on the art scene in the United Arab Emirates with major commissions from Art Dubai and Alserkal Avenue, residencies in Abu Dhabi and Dubai and the release of an artist’s edition record with The Vinyl Factory, UK of which several tracks have had radio play on BBC national radio. Artists CV can be found on the above site

Oscillatorial Binnage is the quartet comprised of Fari Bradley, Toby Clarkson, Chris Weaver and Dan Wilson, offering extreme improvised noise and hardcore conceptual art in glorious equilibrium. A post-electronic research group, the Binnage investigates the frequencies of everyday objects – kitchen appliances, debris, fence posts, paperback books – and combine these with hacked electronics to reveal “miraculous agitations” – audio art that refers back as far as Sir Francis Bacon and as far forward as the most visionary of sci-fi seers. 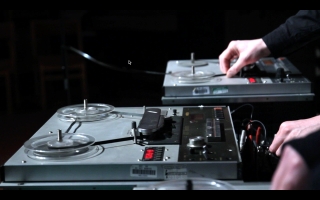 Howlround is the duo of Robin Warren and Chris Weaver, they create recordings and performances entirely from manipulating natural acoustic sounds on vintage reel-to-reel tape machines, with additional reverb or electronic effects strictly forbidden. In an age where one can create all manner of electronic music with a simple swipe of a mouse, Howlround prove not only how much fun is to be had in making things complicated again, but conversely just how little effort is sometimes needed to create a genuinely uncanny and beguiling soundworld: the rough underbelly of our pristine, Pro-Tools universe.

“Spiral” by Ed Baxter. Performed by the Resonance Radio Orchestra

The Resonance Radio Orchestra is a floating pool of musicians, engineers, sound-effects creators, actors, writers, composers and broadcasters devoted to making live radio-art. It is based in central London as the in-house artistic wing of Resonance104.4fm, under the direction of Ed Baxter and Chris Weaver.